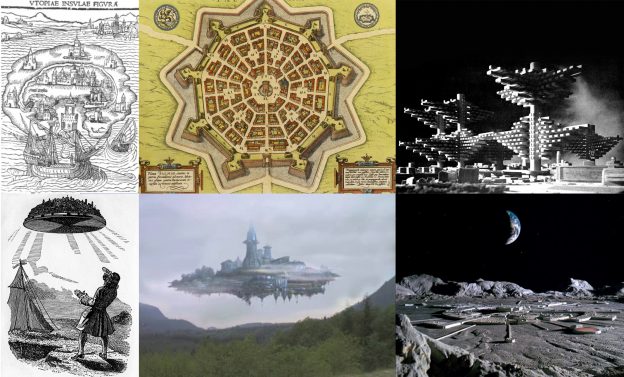 Research and exhibition project Utopian Cities, Programmed Societies, organized by Dana Diminescu and Tincuta Heinzel, the summer camp gathered students, scientists, and artists from Romania, UK, Germany and France.
Exploring the relationship between utopian constructions of cities and societies, corresponding with architecture, technology, environment and industry, evaluating possibilities for transforming existing and former utopias. The planned city of Victoria served as a starting point and as the place to discuss and explore some ideas of utopian societies.

Participating with a talk about Architectural and social utopias in Science Fiction movies as part of a group of doctoral candidates from the KHM in the summer camp in the city of Victoria, Brașov in Romania. Further talks by the group from KHM were Cybernetics and fiction  by Georg Trogemann, From other places to utopian cities by Somayyeh Shahhoseyni and Virtual-Realities-Hybrids by Tobias Bieseke.

Image: Some ideas of utopian cities, singular architectural constructions housing and visualizing the system of society. Some fictional, some realized, the visualizations itself provide the basis of debating utopian cities.